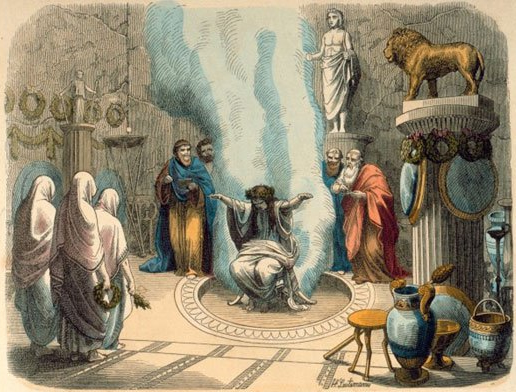 “One of the more infamous consensus-building methods is known as the Delphi Technique. Curiously, it was named for the oracle at Delphi, a special spot in ancient Greece, where a crack in the earth was said to emit vapors. A priestess sat on a stool directly above those vapors and under a hallucinogenic spell, spoke gibberish. This gibberish was interpreted by high priests as a forecast of the future.” – Dissent and the Delphi Technique

In 2019, a scientist sits in front of an array of digital screens and speaks in jargon-laden gibberish and a whole slew of fellow scientists logon to babble in assent as they forge the unquestionable holy consensus.

The high priests of the Mass Media Industrial Complex interpret the scientist’s gibberish and cast a hallucinogenic spell through their worldwide digital broadcasts that all global citizens must obey or face being cast into the pit of digital ostracism…social media de-platforming! How do we cope with getting shadow-banned and can no longer receive the virtual validation to our defacedbook posts on our Orwellian monitoring devices smart phones? Where do we find that safe space where our twatter accounts have the approved checkmarks and our instaham posts showing our latest fast feed meal experiences to signal our virtues to our fellow denizens of the global feedlot?

Being shut out of the digital bazaar of carefully curated exhibitionism and voyeurism on teh Interwebz….a fate worse than death! So you better toe the line of our oracle matrix so you can remained plugged in and turned on….

This is Duh-mock-ruh-see at it’s finest, worthy of export to all the world’s foreign shores via fiat currency funded wars. It is leveraging the most powerful weapon in their arsenal, and relying on herd peer pressure to get we the sheeple to conform to the coordinated narrative. Everyone must have their way, but only if they do it the way T.H.E.Y. say.

Aren’t you glad you live in a Brave New World Order of participatory Democracy full of fairness, equality, diversity, vibrancy and social justice for all?

Democracy – A variation of the Delphi Technique, applied society wide to manufacture consensus and divide and conquer the citizenry using social engineering tools like the Hegelian Dialectic. Works through the creation of election events with tightly controlled choices between candidates from two parties that appear to be opposing factions, but are in reality working towards the same goals in perpetuating the Corporate-Fascist State. Citizen participation is the key to gaining assent to their enslavement.

More and more, we are seeing citizens being invited to “participate” in various forms of meetings, councils, or boards to “help determine” public policy in one field or another. They are supposedly being included to get ”input” from the public to help officials make final decisions on taxes, education, community growth or whatever the particular subject matter might be.


Sounds great, doesn’t it? Unfortunately, surface appearances are often deceiving.
You, Mr. or Mrs. Citizen, decide to take part in one of these meetings.
Generally, you will find that there is already someone designated to lead or “facilitate” the meeting. Supposedly, the job of the facilitator is to be a neutral, non-directing helper to see that the meeting flows smoothly.

Actually, he or she is there for exactly the opposite reason: to see that the conclusions reached during the meeting are in accord with a plan already decided upon by those who called the meeting.

The process used to “facilitate” the meeting is called the Delphi Technique. This Delphi Technique was developed by the RAND Corporation for the U.S. Department of Defense back in the 1950s. It was originally intended for use as a psychological weapon during the cold war.


However, it was soon recognized that the steps of Delphi could be very valuable in manipulating ANY meeting toward a predetermined end.

How does the process take place? The techniques are well developed and well defined.

First, the person who will be leading the meeting, the facilitator or Change Agent must be a likable person with whom those participating in the meeting can agree or sympathize.


It is, therefore, the job of the facilitator to find a way to cause a split in the audience, to establish one or a few of the people as “bad guys” while the facilitator is perceived as the “good guy.”

Facilitators are trained to recognize potential opponents and how to make such people appear aggressive, foolish, extremist, etc. Once this is done, the facilitator establishes himself or herself as the “friend” of the rest of the audience.

The stage is now set for the rest of the agenda to take place. At this point, the audience is generally broken up into “discussion—or ‘breakout’—groups” of seven or eight people each. Each of these groups is to be led by a subordinate facilitator.
Within each group, discussion takes place of issues, already decided upon by the leadership of the meeting. Here, too, the facilitator manipulates the discussion in the desired direction, isolating and demeaning opposing viewpoints.

Generally, participants are asked to write down their ideas and disagreements with the papers to be turned in and “compiled” for general discussion after the general meeting is reconvened. This is the weak link in the chain, which you are not supposed to recognize. Who compiles the various notes into the final agenda for discussion? Ahhhh! Well, it is those who are running the meeting.

How do you know that the ideas on your notes were included in the final result? You Don’t! You may realize that your idea was not included and come to the conclusion that you were probably in the minority. Recognize that every other citizen member of this meeting has written his or her likes or dislikes on a similar sheet of paper and they, too, have no idea whether their ideas were “compiled” into the final result! You don’t even know if anyone’s ideas are part of the final “conclusions” presented to the reassembled group as the “consensus” of public opinion. Rarely does anyone challenge the process, since each concludes that he or she was in the minority and different from all the others.

So, now, those who organized the meeting in the first place are able to tell the participants and the rest of the community that the conclusions, reached at the meeting, are the result of public participation.

Actually, the desired conclusions had been established, in the back room, long before the meeting ever took place. There are variations in the technique to fit special situations but, in general, the procedure outlined above takes place.

The natural question to ask here is: If the outcome was preordained before the meeting took place, why have the meeting? Herein lies the genius of this Delphi Technique.

It is imperative that the general public believe that this program is theirs! They thought it up!

They took part in its development! Their input was recognized!

This very effective technique is being used, over and over and over, to change our form of government from the representative republic, intended by the Founding Fathers, into a “participatory democracy.” Now, citizens chosen at large are manipulated into accepting preset outcomes while they believe that the input they provided produced the outcomes which are now theirs! The reality is that the final outcome was already determined long before any public meetings took place, determined by individuals unknown to the public.

Can you say “Conspiracy?”

According to New York University scientists, a combination of AI and radiologists is more accurate at detecting breast cancer

According to a new study conducted by scientists at New York University, an artificial intelligence tool that has been specifically trained on a variety of screening mammography images has been able to demonstrate 90% accuracy when detecting breast cancer. Together with the analysis from radiologists, it will help to present the most accurate results which […]

An Annual Demonstration of Respect for the Rule of Law

Oahu, Hawaii – New Years Eve 2018 The above posted YouTube video of someone driving down the freeway while filming the skies gives a good snapshot of just how widespread the people of Hawaii defy the law on an annual basis. In every town and every district on the island of Oahu, from about […]

As the labor market becomes more competitive each year, current and newly graduated students may face difficulties when looking for jobs.  According to the US Bureau of Labor Statistics, the unemployment rate at the end of 2019 was about 3.5%. The situation is similar in European countries as well. What is interesting, each year, even […]