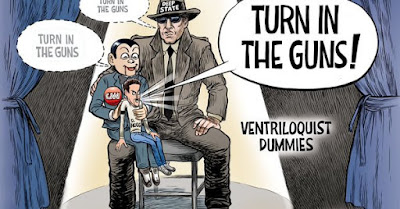 Some idiots are more useful than others…especially young, indoctrinated ones getting their marching orders  from astroturfing outfits hell bent on disarming the citizenry of an entire nation. Youthful tears and amping up feminine fears for an overwhelming display of the largest cattle drive march since the Vietnam War era protests are all supposed to convince the nation today that THE TIME HAS COME!

While I largely agree with Heartiste’s take on today’s festivities –“Guns are not the problem; people, culture, and policy are the problem.” —  the real problem in our nation at the present is the effectiveness of the  systemic indoctrination of  such a large swath of our nation’s youth by our education-industrial complex.

To heed the advice of that wise Spaniard Santayana, who famously stated that “…those who fail to learn from history are condemned to repeat it,” you have to first be able to read an accurate recounting of history before you can even begin to learn from it…which is why the modern Public Schooling system is designed to dumb the students down and get them to focus their semi-literate studies on LBGTQ@PZ&CL#SX tolerance, six-gorillion gender identifications, anti-bullying snitching campaigns and nationally orchestrated walk out stunts instead of any semblance of a real education focused on proper reading, writing and arithmetic….especially the reading part.

They don’t want the youth to read about the history of genocides committed by Governments who always  disarmed a targeted populace before carrying out evictions, dispossession, ethnic cleansings and/or genocides. How many of these useful youthful idiots do you think have read books like The Gulag Archipelago?

And how we burned in the camps later, thinking: What would things have been like if every security operative, when he went out at night to make an arrest, had been uncertain whether he would return alive and had to say good-bye to his family? Or if, during periods of mass arrests, as for example in Leningrad, when they arrested a quarter of the entire city, people had not simply sat there in their lairs, paling with terror at every bang of the downstairs door and at every step on the staircase, but had understood they had nothing left to lose and had boldly set up in the downstairs hall an ambush of half a dozen people with axes, hammers, pokers, or whatever else was at hand? After all, you knew ahead of time that those bluecaps were out at night for no good purpose. And you could be sure ahead of time that you’d be cracking the skull of a cutthroat. Or what about the Black Maria [Government limo] sitting out there on the street with one lonely chauffeur — what if it had been driven off or its tires spiked. The Organs would very quickly have suffered a shortage of officers and transport and, notwithstanding all of Stalin’s thirst, the cursed machine would have ground to a halt!

If… if… We didn’t love freedom enough. And even more — we had no awareness of the real situation. We spent ourselves in one unrestrained outburst in 1917, and then we hurried to submit. We submitted with pleasure! – Alexander Solzhenitzyn

Here’s the real situation: just like the mass arrests of Stalin’s Red Terror, plans for similar operations are already planned for here in USA Inc. All the Executive Orders are in place for Martial law to be instated by the stroke of a Presidential pen, usable facilities for conversion to FEMA camps in every community across the country, and nearly all police forces have been militarized and prepping for civil unrest for the last decade or more.

The only thing holding it all back is the fact that we are the most heavily armed civilian population in the history of the World.

Even if T.H.E.Y. fail to disarm enough of we the sheeple, they may eventually try to commence with their police state plans anyways after some False Flag event or some other pretext kicks off World War: Episode III. When martial law gets declared and the armed agents of the Brave New World Order are roaming our neighborhoods carrying out pre-dawn raids and establishing road block checkpoints to arrest your neighbors, will enough of us remember Solzhenistyn’s hard learned lessons?

Solzhenistyn and his fellow gulag prisoners were left wishing they had tried to make a stand with axes, hammers and farming tools…will the armed Americans  realize the situation when it arrives and make their stand with the tools available to them — or will the majority submit with pleasure? Because that’s what today’s march was all about.

A demonstration of just how many minds of the next generation they have already assimilated into the Globohomo borg and submit to our overlords with eager enthusiasm. These are the young minds on parade…young minds bereft of the knowledge of what happened in eras past. Bereft of the lessons of history so that they are condemned to repeat them.

The formula has already been established, as America’s Most Aggressive (((Civil Rights Organization))) points out:

And that is precisely what today’s march was for, to demonstrate the effectiveness of their regularly scheduled programming to deliberately dumb down our nation’s children. Not only are these masses of indoctrinated youth ignorant of the readings and writings of real history, they don’t have an understanding of the arithmetic at play here either. They are simply doing what they’ve been told to do. We got the Government and the Hatred part already summed up. Only one more addend to go before the equation can be completed and the desired final solution arrived at.

What’s that, you say? You don’t believe the majority of the Government literally hates we the sheeple?

In a country where Corporations have permission if not downright cooperation of the Government to socially engineer our society and poison our air, food, water, and culture, do we really think The Hierarchy Enslaving us has anything other than malevolent intentions for the vast majority of the populace?

Ye shall know them by their fruits.

If you really believe the funders and organizers of today’s propaganda parade and their co-conspirators in the FedGov leviathan really want to “SAVE LIVES,” I got a pedestrian bridge in Florida to sell you.

The Hawaii congresswoman and Democratic presidential candidate Tulsi Gabbard is suing Hillary Clinton for defamation, alleging the 2016 nominee described her as a “Russian asset” and claiming more than $50m in damages. Gabbard, who sued Google in July 2019, also claiming $50m, filed the lawsuit in the southern district of New York. She claims that in October 2019 Clinton “falsely stated” […]

Ram Dass, who in the 1960s joined Timothy Leary in promoting psychedelic drugs as the path to inner enlightenment before undergoing a spiritual rebirth he spelled out in the influential book Be Here Now, died at home on Sunday. He was 88 years old. “With tender hearts we share that Ram Dass (born Richard Alpert) […]

It’s like current year 2019, and like it’s so frustrating to see so many people still believe all these crazy conspiracy theories on teh Interwebz. Like all these lunatic anti-vaxxers and their raving lunacies trying to mislead everyone into not giving their infants life-saving and essential vaccines! Behold the frothing-at-the-mouth insanity: How irresponsible! @ 18:00 […]