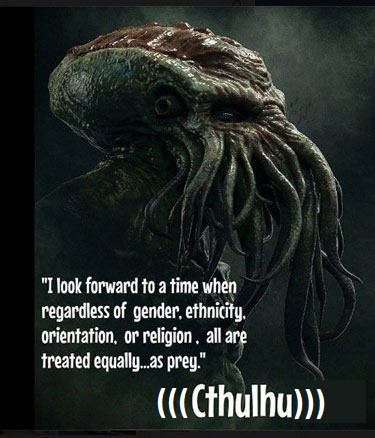 T.H.E.Y. go by many different identities: the Powers That Be, the Elite, the New World Order, the Shadow Government, the Globalist Neo-Cons, the Banksters Too Big To Fail, the Trilateral Commision and Council on Foreign Relations cabal; the bohemian grove reptilian zionist alien bloodlines of the satanic luciferian illuminati nephilim — the pagan occultic cabalistic gnostic cannibalistic sodomite pedophile freemason pornographers from hell…however you wish to label or identify them,  you must understand that on some level or another, all of these descriptions are invariably grounded in some literal or figurative aspect of the reality of their existence.

Regardless of the mask they wear, we must understand that T.H.E.Y. are no longer content to simply offer us the programming to lead us into voluntary self-enslavement and reap their harvest of souls lost to deviant perversions, emotional terror, and the pounds of flesh they extract through usurious compound interest alchemy.
T.H.E.Y. are turning up the dial and raising up the temperature to literally and figuratively cook our spirits and consume the bounty of our flesh and blood, at the cost of our sanity, our posterity and our souls. Their primary means of achieving these infernal ends is both extraordinarily simple and enigmatically complex. In a word, T.H.E.Y. employ basically one thing that is their most potent and effective weapon to rule this world – black magic spell casting.
There most powerful black magic spell, is the spell of inversion. T.H.E.Y. call it Abracadabra…. “I create as I speak.”
Or to put it simply, T.H.E.Y. Lie.
And when we believe them, their Abracadabra spell works exceedingly well. It creates an extraordinary hold over our bodies, minds and souls. It is only through the power of the lie that T.H.E.Y. gain power over us to do as T.H.E.Y. will.

Ye are of your father the devil, and the lusts of your father ye will do. He was a murderer from the beginning, and abode not in the truth, because there is no truth in him. When he speaketh a lie, he speaketh of his own: for he is a liar, and the father of it. – John 8:44

Above all else, we must understand that T.H.E.Y. lie to themselves.
T.H.E.Y. believe they “create” as they speak…but they do not have the power to create – only the power to pervert, corrupt, to warp and destroy all that is good, pure and natural. T.H.E.Y. cannot create anything that is fresh, wholesome, organic or beautiful, they can only take those things that are pure gifts from the Father of Creation and pervert them with inversions.
For when they cast their spell on us, we are led to believe that up is down, black is white, good is boring, evil is cool, ugly is beauty, debt is money, truth is hate, war is peace, freedom is slavery and ignorance is strength.
T.H.E.Y. believe they are superior to the average human being, that they are chosen, above we the lowly sheeple, and that we are literally and figuratively cattle to them, whose sole existence is for their benefit and usage, however T.H.E.Y. see fit.
T.H.E.Y. reject the Truth of the Son of Man who came to deliver us from evil. T.H.E.Y. embrace the eternal revolution against God the Father and perpetually work towards a life of indulgent, hedonistic excesses of materialistic opulence and luxury provided by the mass enslavement of humanity as their paradigm for what is the ultimate achievement of life on this plane of existence.
These are the lies that T.H.E.Y. tell themselves, to accomplish their parasitic existence at the expense of the rest of humanity. If they weren’t involved in the worst, most gruesome and depraved crimes against humanity throughout all of history, one could almost feel sorry for them. Almost.
For these are they who have crossed the line, and went over to a point of no return. These are they who have sold their souls and are destined for eternal perdition. These are they who have given themselves over to their lives of sin and have become enslaved to their vices and perversions. At the moment, they revel in their perceived power and wealth and lord it over us with malevolent glee. Sooner or later, we all get what is coming, and T.H.E.Y. are no exception.
This is why He who came to deliver us all, told us all that the Truth shall set us free.
Because the power of deception is really the ONLY power T.H.E.Y. have…and it is only when we consent and assent to accept their lies as Truth that they can use their power to manipulate, enervate, use us up and destroy us.
This is why they employ predictive programming to reveal the method in the mass media that T.H.E.Y. have controlled for quite some time.

Predictive programming is another vector of assault. It’s very subtle as it is usually cloaked in science fiction and ornately wrapped in the glittery garb of stimulating entertainment. It’s become a fascination for people to witness totalitarian and dystopian futures and watch the end of the world brought on by everything from plagues, global warming or an ice age, to meteor impacts and alien invasions.

This is programming. Familiarizing the target audience with potential outcomes in a milieu that serves their purpose. One of fear and fatalistic acceptance. It’s nothing but conditioning disguised as entertainment.

That entire industry is controlled by the same manipulators, steering mankind by the nose in any direction they want. The sheer bombardment of mind-numbing genres of soul polluting films and TV shows from vampire and slasher flicks, war and police glorification memes, to end of the world scenarios is beyond overwhelming.

On top of this the news media continually pump out assumptive information directing the audience towards their desired conclusions. Their carefully scripted narrative is obvious to the discerning eye, not only in the news but it runs through every facet of society from media to schooling to even the products people consume, right up to and including which toys children are to play with.

The point is we’re being programmed for a desired future. Not one we desire, one they desire. The more blindly familiar people are with their intended result the more quickly and easily it will be adopted. The world facing a major cataclysm of some sort, a favorite theme, gives the climate change fear program and world economic “solution” tremendous impetus, for example. The world needing a savior mentality greases the idea of some sort of new world governance to save the day, no doubt with some charismatic leader eventually at the helm.

That may be a bit oversimplified but that’s how it works.

T.H.E.Y. have always told us what they are going to do to us before they do it. By ignoring their warnings, we empower their inversion spells to work it’s insidious magic on our minds. This is also why we were told that the Truth will set us free. The only thing any of us can do is discover the Truth and align our lives as best we can to live in harmony with the Truth. That is the only way to be free of the enslavement to their lies in this Brave New World Order. Otherwise, we are only consenting to giving them conscious permission or cowardly acquiescence:

This is where the rubber meets the road. Whether programmed in whatever fashion or not, we are free agents. Try as they will with occult practices or social and media manipulation, the sanctity of the human spirit cannot be violated.
Unless we allow it.
Any way you look at this issue, the power is ours. We are the control center, not the self-ordained psychopathic rulers or whatever influences we’re being bombarded by. We each individually have the controls.

Understanding how they work via the media, entertainment, occult practices and outright admissions is intrinsic to our awakening to the empowerment available to us. To just lay down and take it for any reason, engineered or so-called “ordained” or not, is tantamount to suicide and ultimately genocide and a complete takever.

That we have so much enlightening information and connectivity at our disposal is unheard of in human history. Let’s have the courage to utilize it and activate our lives accordingly.

At this stage of transition into our planned dystopian reality, things are looking pretty grim. But resistance is not futile, you just have to make it personal.
At the present day, things from this conspiritard’s jaded eyes are looking rather doom-laden and hopeless on a macro-level in the face of the march towards global domination perpetuated by the hierarchy enslaving us. It is not a literal march of a destroying army come to wipe us off the face of the earth…but rather a cultural and spiritual war for all of our souls. They can only enslave us totally if we fall prey to their lies and deceits and we first enslave ourselves. As we see our fellow humans fall in the face of this relentless onslaught, we can do nought but stand in firm resolve to refuse and resist unto the very end.
Each of us can only worry about those things we can control, and strive to live in accordance with Truth. The lord of this world is nearing the achievement of total tyranny over mankind. What ever may come, it is really all any of us can do. T.H.E.Y. may take our lives, but T.H.E.Y. cannot take our honor which will be a man’s true legacy. As historian Oswald Spengler noted in Men and Technics:

Already the danger is so great, for every individual, every class, every people, that to cherish any illusion whatever is deplorable. Time does not suffer itself to be halted; there is no question of prudent retreat or wise renunciation. Only dreamers believe that there is a way out. Optimism is cowardice.

We are born into this time and must bravely follow the path to the destined end. There is no other way. Our duty is to hold on to the lost position, without hope, without rescue, like that Roman soldier whose bones were found in front of a door in Pompeii, who, during the eruption of Vesuvius, died at his post because they forgot to relieve him. That is greatness. That is what it means to be a thoroughbred. The honorable end is the one thing that can not be taken from a man.

Once you discover the Truth, you really are left with only two choices in our Brave New World Order: cowardly acquiescence or steadfast duty in the face of doom unto an honorable end. George Washington purportedly once declared: “The thing that separates the American Christian from every other person on earth is the fact that he would rather die on his feet, than live on his knees!”

I do believe the time is soon coming when we will learn if any remnants of that sentiment remain.

How to Take Control of Your Business Success

When you’ve been working hard in your business, you are naturally delighted when it starts paying off. You’ve spent uncountable hours developing your brand, working on your website, streamlining processes, and marketing your business on social media. It’s taken time to transform your initial business idea into a viable business. As you balance on the […]

Everyone on teh Interwebz is aware of trolls, trolling behavior, and people who leave comments or post in forums that seem to follow a particular agenda of disrupting, dividing, or degrading the quality of discourse on a wide variety of topics. Many people seem to be under the assumption that most trolls are not a […]

It is said that the limitations we face are the ones placed by ourselves. This is also the case when it comes to seeking finances. You may have already locked yourself out of getting a loan because you have a bad credit score. It’s still possible to get a loan even with bad credit. Keep […]