Feminism has made a lot of “male sexual entitlement”, the demon responsible for everything from catcalling and beer commercials to sex trafficking, according to the Cathedral.  Indeed, the feminist attack on male sexuality stems from its constant battle with “male sexual entitlement”; the feminist theory goes that if a man feels that he has a decent shot at having sex with a woman under nearly any normal circumstances, he’s actually oppressing her with his patriarchal entitlement to her body, or something like that. 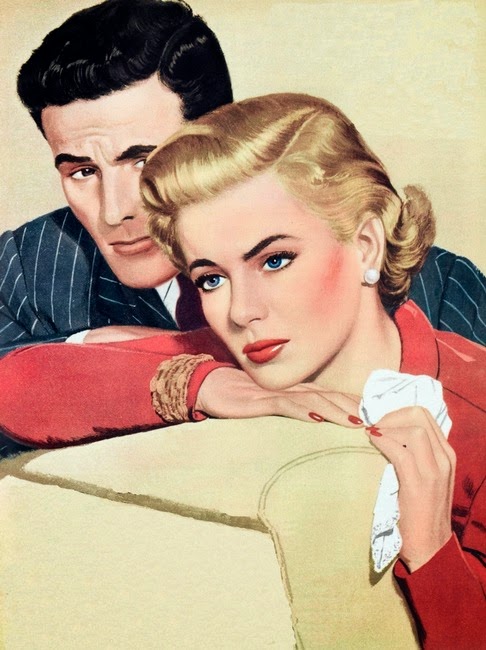 Because feminism can’t wrap it’s frizzy little head around the concept that the male desire for sex – which crosses all sexual preferences in our sex – is such a powerful force in our lives that we would willingly give up, say, a fulfilling platonic relationship with a woman if there wasn’t a sexual component.  Despite the propaganda about gender equality, when it comes to dating and mating, feminism still jealously guards the female imperative to control sex in the SMP.  Feminism feels assured that if it shames and browbeats enough men, they will cease pitting women against each other in competition for the highly-valued mates (“Alphas”, though they never use the term) and allow feminine society to determine which women should end up with which men and for how long.

Of course that’s ludicrous, for many different reasons, but that’s the feminist M.O. on mating: male sexual entitlement (male sexuality) is BAD, while female social entitlement (“Let’s just be friends”, or LJBF) is seen as some gracious gift nearly as valuable as the one she keeps between her legs. 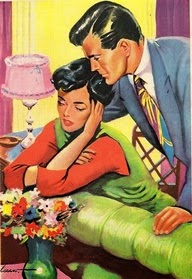 Female Social Entitlement is the ugly dark side of the feminist equation.  You won’t find it spelled out specifically in the literature, exactly, but it implicitly enshrines the AF/BB concept as an institution, when accepted.  And this, not coincidentally, is where many poor Beta boys start the inevitable downward spiral.

When a woman rejects a man, but doesn’t want to lose access or support she can casually pick up from him at no personal cost to herself, using LJBF is a way her Rationalization Hamster can assuage her guilt for rejecting a dude who, on paper, is a Perfectly Decent Guy.  It’s not that she dislikes the Beta Boy – she just has no tingles for him, and her hypergamous instinct tells her to shelve such a pristine dude for later, when her sexual capital starts to wane.

By attempting to make a social connection with an undesired male permanent with a LJBF, the woman is staking a kind of claim on his time and energy that she does not necessarily deserve . . . but she rationalizes it through her sense of social entitlement.  Why wouldn’t a decent man want to be her friend, after all?  Why would he allow base sexuality to come between him and what she just knows in her heart is a fulfilling future of platonic social interaction?  Why wouldn’t he want to introduce her to his circle of handsome and successful friends?  Is he that threatened by her?

That’s what Female Social Entitlement is: the expectation of an alliance based on an unreciprocated sexual interest.  It’s a shit-test of the highest order, and women know it.  Indeed, to her mind, rejecting a LJBF shit-test is both a criticism of her worthiness and – as a result – her hamster must reconcile such a rejection with her own sense of self-worth (usually hyperinflated) by denigrating the male who dared reject her gracious offer of friendship. 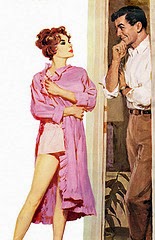 But for the Blue Pill Beta Chump, LJBF is an insidious trap.  Not seeing it as the shit-test it is, they blindly stumble into the heart of female social expectation with their dick in their hands and end up frustrated, angry, and resentful.  If they do stick around long enough to witness the woman’s unceremonious and inevitable impact with the Wall, they might just pick her up in a moment of weakness . . . still seeing her for the highly-valued potential she once had, not the last dregs of her sexuality she’s reserving for him . . . or whatever Alpha she can scare up one last time.

Women who use the LJBF rejection don’t understand the implied humiliation they are heaping on the recipient – they see their friendship as a valued consolation prize, perhaps ultimately more valuable than their own sexuality.  Friendship, to women, implies an alliance . . . with other women.  With men, it’s decidedly a one-way street.  Of what value does a platonic female friend have for a dude?  Unless she’s actively trying to get him laid, she’s represents a waste of resources unlikely to pay any significant dividends.  She will expect her orbiting chumps to help her move, help her with work or school, bail her out of jail or trouble, come to her defense, and even loan her money without any sexual expectation because the concept of “friendship” varies so differently between men and women.
Yet if you attempt to challenge a woman on this, in most cases she will become rightously offended.  If of a feminist bent, she will attempt to shame you for your inability or unwillingness to control your sexual desires, degrade you for being shallow, and otherwise respond more or less as she would for rejecting any other shit test.

I’ve seen a number of adept players spin LJBF into something more productive, but it takes iron-clad holding of Frame and a cultivated insensitivity to female feelz.  The acknowleged master in my day was a pre-law Duke student named Trevor, who was the kind of short, aggressively-Alpha dude who made up for a lack of looks and build by utterly dominating Game.

When Trevor would hear LJBF, he’d get a concerned look on his face.  He could play it a couple of different ways, but usually the conversation went something like this:

SHE: “Look, I really like you, you’re a great guy, but I don’t want to be in a relationship right now.  Can’t we just be friends?”

TREV: “My friends help me get laid.  Are you going to do that?”

SHE: “That’s the dumbest thing I’ve ever heard!”

TREV: “True nonetheless.  They find it a rewarding pursuit – I can be a very, very good friend, (This was true – Trevor was highly appreciative if you found him a promising lead).  But if you aren’t working in my best interest, you’re not really my friend, are you?”

SHE: “You wouldn’t really hit on my friends . . .” (preparing for another shit-test, now that she realizes that Trev is not your AFC)

TREV: “Honey, I’d fuck your two best friends on your bed while you watch, just ask any of my friends.  I’m in this to get laid, and either you’re with me or against me.” (it was the 1990s . . . I actually heard him use the line “if you don’t blow me in the parking lot, the terrorists win” successfully once).

And on and on it went.  By steadfastly holding Frame and denying the legitimacy of her Female Social Entitlement, he could turn a LJBF into a fast close in the space of three minutes.

Not everyone is so masterful.  Trev is now a very successful patent attorney, and he had natural charisma the way Sinatra had pipes.  But there are some strong lessons to be pulled from his Game.

First, of course, is that LJBF is a bona fide shit-test under any circumstances.  If you accept it, you lose.

Second, women have a natural feeling of entitlement to your friendship, alliance, and good will based entirely upon your sexual attraction to them (and their lackluster assessment of you as a mate).  This is not a bad-faith move, as it appears, it’s just the residue of feminine hypergamy at work.  Stacking up a few orbitors is good insurance for BB later on down the road, post-Wall.  But if you don’t want to be BB, then you have to disabuse them of the notion that your friendship – which serves as a diminished form of your commitment to her – is free for the asking.

Beta chumps will get suckered on this play.  Alphas won’t.  They don’t cooperate with Female Social Entitlement any more than a feminist cooperates with Male Sexual Entitlement (unless he’s really cute or has a motorcycle or something).  An Alpha will shut that shit down the moment it comes up.

A Beta aspiring to break the vicious, ugly cycle of LJBF often discovers that rejecting a woman’s Female Social Entitlement – and dealing with the resulting ugly consequences of her hamstering – is often the first step on the road to breaking his Beta.  By valuing your interpersonal relationships and actual friendships as much as a woman values the sexual power of her vagina, you establish hand in any relationship you indulge in.  Keeping the idea of “female friends” as a capitulation to Female Social Entitlement, and a genuine disservices to the interests of the man in question, is vital to cultivating the masculine mindset that keeps your Game fresh and effective.

There are ways to use the “LJBF” cynically, of course.  Agreeing, ala BB, to “just be friends” and then using that friendship to get close to her own circle of female friends is one way to go about it.  I’ve seen a hardened player go through three or four girls in the same social circle by trading on the “Oh, I’m good friends with Julie, but she’s not into the same sorts of kinks I am” line and make it pay off handsomely.  Of course, he left a trail of broken hearts and bruised hamsters behind, but that’s the nature of the beast.

Lastly, for those of you genuinely offended by the idea that a man and a woman can’t “just be friends”, your idealism does you credit . . . but it’s going to damage your social life.  The painful LJBF meme is openly acknowledged on both sides of the ideological spectrum, although the perspectives on it are different.  Feminism and its allies want you to believe that men are secretly noble and good and can “control their sexuality” enough to be decent to women without their sexuality becoming an issue, but that nobility is hidden under a thick layer of culturally-derived and artificial baggage about “gender norms” and stereotypes.

The Red Pill, on the other hand, acknowledges that men are sexual creatures whose primary goal in life is expressing that sexuality with as many women as he comfortably can – and that sexually non-productive relationships are an unnecessary drain on his resources.

Now the more Beta Boys we can get to recognize the reality of the latter, and start answering LJBF with the acid it deserves, the better.

When Primo Levi was imprisoned at Auschwitz, he was puzzled to find that a fellow inmate would vigorously wash his body every day. To Levi, the act seemed pointless: there was no one to please with a fresher countenance, and without soap or clean water, the practice did little to promote health or hygiene. The […]

The Best First Knife for a Kid

Editor’s Note: This excerpt is from The Young Adventurer’s Guide to (Almost) Everything — a book addressed to kids. The Most Important Tool You’ll Own It wasn’t so long ago that most kids were given a knife at some point before their tenth birthday, taught how to use and care for it, and, perhaps most […]

Podcast #519: How to Start Your Own Farm

Have you ever been sitting at your office desk and found yourself daydreaming about becoming a farmer?  My guest today has written a practical, all-encompassing handbook to help you turn that dream into a reality. His name is Forrest Pritchard. He’s a farmer and the co-author of the book Start Your Own Farm: The Authoritative Guide to Becoming […]